← more from
de la Catessen
Get fresh music recommendations delivered to your inbox every Friday.
We've updated our Terms of Use. You can review the changes here.

by Music of Transparent Means 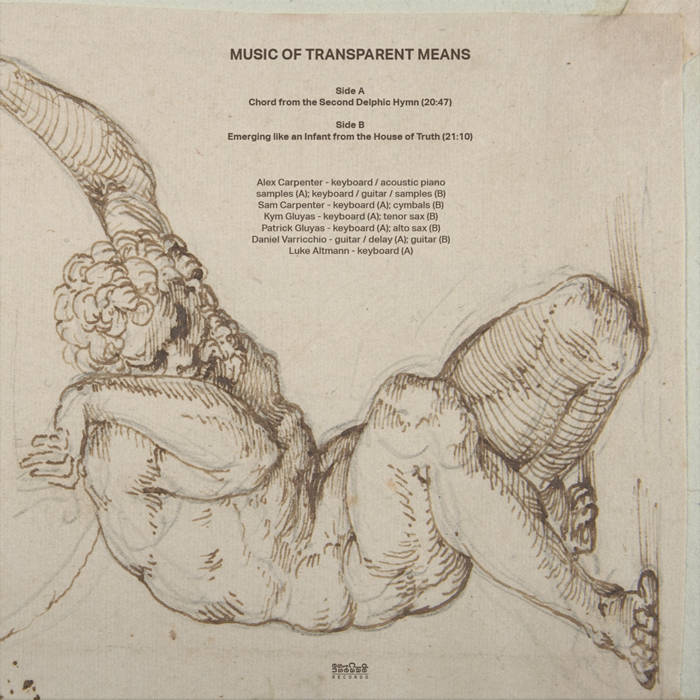 "Staggering... one of the records of the year"
-Shame File


“Chord from the Second Delphic Hymn shimmers and undulates clangorously like some freshly awakened metallic beast … the keyboard and guitar textures chime like an orchestra of dulcimers ... controlled thunder ... a kind of inner euphoria ... the result both a mutating organism and volcanic forcefield"
-Textura


“…Carpenter wants to evoke a specific response in the listener, an experience of Sound (the capital is deliberate)—sound in and of itself, independent of cultural conditioning, sound as experienced by the child who does not yet know what ‘sound’ is (…) If it must be concluded that Carpenter’s project contains contradictions, that is exactly what makes it so interesting…”
-Stephen Whittington, RealTime

Discovering Music Of Transparent Means was one of the three or so genuine revelations from my fifteen years of living in Adelaide, Australia. I was in my twenties and had spent some time wondering why the city I was surviving hadn’t offered much in the way of genuinely engaging and affecting ‘experimental music’ (all terms used advisedly) during my tenure. I’d also somehow glommed onto the work of a number of American composers and polymaths – La Monte Young, Tony Conrad, Arnold Dreyblatt, Phill Niblock, Maryanne Amacher – and somewhere in the back of my head, I was looking for a similar music, locally made, that combined the rush and roar of the best rock music, its volume and its joyous love of kicks and freedom, with the temporal and experiential obliterations of the best minimalism.

So, finding Music Of Transparent Means (MOTM) was a heavy deal. A loosely shaped ensemble, MOTM was really the conceptual and aesthetic expression of éminence grise, Alex Carpenter, a fiercely intelligent and disciplined musician, composer and thinker who balanced that intensity with a genuine warmth and kindness in the personal realm. (The latter is far more important, in the end, than the former, and it’s one reason why I still listen to MOTM.) Alex had come up through time-honoured traditions – playing in rock bands as a teenager, studying classical guitar, finding himself embedded in, and ultimately chafing against the ‘classical guitar scene’: “It was a culture with limits. I didn’t just want to work on perfecting the Bach suites and discuss endlessly the merits of one particular arrangement over another one.”

Instead, Carpenter leaned towards composition over being ‘just’ a guitarist. The means of his expression were many and varied, but he recalls that he “also wanted loud, engaging sounds, alternative tunings, sustained notes and beating nuances that come from multiple instruments and sound sources.” A concurrent interest in the work of La Monte Young and his peers – Carpenter wrote an essay, “La Monte Young: Towards Absolute Music”, as a student in the nineties, which was an early, oft-referenced discussion of Young’s work - proved that Carpenter had intellectual chops to burn, as well, but as his colleague and peer Luke Altmann wryly comments, “he had an endearing love of the ridiculous and was the first person you’d look for at a party.” I can’t help but feel that you can sense that in the joyous sensory over- stimulation of MOTM – the music is, quite simply, a head-fucking blast to listen to and swim through.

Besides being the person releasing the album you’re now holding in your hands, Altmann was also a key facilitator for Carpenter, via the former’s De la Catessen Gallery. “Before I started presenting concerts at De la Catessen in ‘05, I meekly asked Alex if he would play there, since I couldn’t see the venue working without him. He agreed, and presented a series of concerts over the next two and a half years which really defined that period locally.” Carpenter’s final concert at De la Catessen, before relocating to the USA in 2007, was the launch of the album Chord From The Second Delphic Hymn. Initially planned as a lathe cut LP, the lathes proved unlistenable, and Carpenter returned to the CD-R format, via his label Vanished. There’s a sense, with this new LP release, of a project finally completed, come to full fruition.

Altmann’s description of “Chord...” is apposite: “As a listener it seems to hover and vibrate. Gravity is acting on it, but it’s failing. Its bubble-like surface swirls and endures, it is resolute but unresolved. But as a performer it’s another story - this beautiful object has an enormous mass and it takes intense physical exertion to keep it in the air. Each keyboard player has a sequence of notes, a sort of mantra, to play over and over, taking longer and longer to complete the sequence on each cycle. However, each note must always be repeated as rapidly, loudly, and consistently as possible, to create as close as can be to a continuous sound, before moving on to the next note. It is utterly exhausting and physically exhilarating.”

Carpenter expands, also taking into consideration this album’s b-side, “Emerging Like An Infant From The House Of Truth”: “The idea in both pieces (and in other pieces I wrote around that time) was to isolate a particular harmonic and textural “field” (for want of a better term) that was complex and engaging, and explore as many nuances as possible within the timeframe of the piece. Also to utilize these fields as channels for perceptual exhaustion and meditation.” I was once part of an MOTM performance – I can’t quite remember whether it was “Chord...” or another piece, but to be fair, we are talking 15+ years ago – and I readily concur with Altmann’s description of performing, and Carpenter’s focus on exhaustion and meditation: it’s tiring but thrilling, and strangely meditative, to be caught within the midst of all sound.

I also remember, once, sitting with Carpenter, and discussing an ideal of music that felt like a “bright white light shone directly into your face.” I mentioned it to Carpenter recently and he said, “I love this metaphor, and I remember talking about it with you! From memory it came from Baudrillard’s phrase “unbearable incandescence,” which I like because it seems to represent my feelings on sound as a resource musicians tap into. We perceive (and value) partial components of this overall “thing” - whether that be within a piece or an entire historic era. These components change, and there can be a flow to that changing, moving image, but the flow can also be interrupted by our preoccupation with a particular “snapshot” of the image.

“Put another way, I see sound as an unbearable incandescence because it is a resource that offers infinite possibilities, and as such we cannot take in all possibilities simultaneously. It needs to filter through our media. But to me it demands a certain reverence and curiosity. We’re aren’t using sound; it is using us.” Ask Carpenter to expand on this, and to explain what he wants people to get out of this music, and he continues: “The sensory overflow of the music that is on many levels quite forceful and unrelenting is an invitation for the listener to let go of the messages and concepts they might normally seek to have confirmed in music. To let go of the composed, performed data.”

I keep returning to the idea of a kind of blissful, obliterated exhaustion as core to the MOTM experience. It’s something Carpenter seems to agree with: “The goals of MOTM essentially centered around the exhaustion of perceptual habits. Given the pervasiveness—and to a certain extent, unconsciousness—of our expectation for music to render the themes, forms and meanings of habitual response, exhaustion was considered an important stage to reach. Only by becoming exhausted with the cultural categories normally sought and emphasized in music, could we really be given an opportunity to move beyond them.” I guess MOTM, and Carpenter, exhausted Adelaide, too – it was sad to see him go in 2007, as much as we all knew that he was destined for much bigger things, and that Adelaide’s cultural conservatism in the ‘00s was no great working context for someone so dedicated to music that sat outside of both the culturally dominant forms and those that presented as legibly counter-cultural within the dominant lexicon. But I learned from MOTM how to be in time and in sound; how to move through and give in to the experience of the sonification of our corner of the world. It was a lesson in possibilities.

Alex Carpenter is an Australian-born artist and researcher living in New York City. He has coordinated numerous group performance events as founder and director of the large-scale minimalist orchestra Music of Transparent Means, and continues to expand the application of his live audio and video delay systems in both recording and public performance. ... more

Bandcamp Daily  your guide to the world of Bandcamp